My brother, Minister Garry, recently preached a sermon entitled “The Voice” based from John 12:20-32. This post is in reference to listening to that still, small voice that tells us what to do. Do you hear it or listen to it? There is a difference.

Awhile back, I was talking with a handyman *”Lou” who was trying to restart his business and offered to quote my friend, Lee and I for some work we wanted done on our places. Lou was polite, friendly, professional and reasonable. Great! 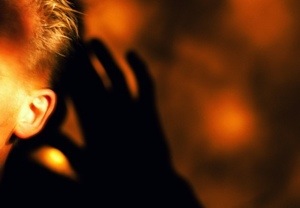 The Lord told me to mention a contract, so I left a message for Lou one evening to write up what he quoted me, what materials I needed, etc. I mentioned the contract to my friend, Lee, who said “why would we need a contract? Lou is just starting out, it’s a small business….”

Family, I was torn! How many judge shows had I seen where verbal contracts we not honored? I have a business degree. I know better! But, I felt bad, Lou was starting over, and needed a break. So I hushed the Lord’s voice about pushing the contract. Lou said he didn’t have any contracts anyway (red flag).

So, Lee, Lou and I scheduled a time we could all meet. That day, Lou was over two hours late–no call. We telephone out of concern and Lou gets on us about the heavy traffic, citing we don’t understand, he was coming from another town, and since we were expecting him, he figured we’d just wait. 😼(bright red flag).

While I’m listening to this frippery, trying to exercise self-control over my rising temper, I kept trying to explain to him that we understand traffic, just call if you’re going to be late. After a 15-minute conversation, Lou still didn’t think he needed to call if he was tardy (flashing red flag). While Lee dismissed Lou’s attitude and finalized plans, I heard The Lord tell me to not let him do any work on my place. I second guessed a little though–was I in my flesh? Maybe he had a bad day. We all mess up from time to time, right? I admit I hoped I misheard, but I kept watching and praying just the same.

Lou came and worked on Lee’s place. It started to look really nice and Lou even called when he was late or not coming….initially and sometimes. He didn’t show up for a day or two, but when he did come, he sang, worked and did a FANTASTIC job. When I stopped over Lee’s, Lou kept asking me when he could start on my place. I told him to finish up Lee’s first, (while I watched and prayed). Even though the work was getting done at Lee’s, The Lord’s voice was clear. Don’t do it (final waving flag with flashers).

How’d Lee’s story end? While what was done was indeed beautiful, some the work was three-quarters of the way done. Lou didn’t show up to finish and then started another job with another client! Lee was VERY upset, but got someone to finish up the work. I’m grateful that The Lord blessed me to HEAR and LISTEN to His voice and I didn’t let Lou work on my place. Thank God for the Holy Ghost!!

Why is it that when the Lord speaks, we sometimes second (or third) guess His direction? Granted, we want to make sure we are walking in the Spirit, but in many cases it can be fear, worry and unbelief. Sara and Abraham (Genesis 16), feared they were too old to have a child and went outside God’s divine will to start the process. Yes, you may be bobbing your head, but we are not exempt!

Bottom line: Sometimes the fear of hurting feelings, worry of losing out on a good deal, getting “cussed” out or looking foolish keeps us bound and making unwise decisions. The enemy has a way of trying to drown out the voice of God by using this age-old tactic. It’s our responsibility to know the voice of God and yield to it as Jesus said in John 10. As we steep ourselves in the Word of God, in prayer, meditation and study, God’s voice will become clearer and the voice of that stranger will cause you to flee from it and the things it suggests.

Let’s practice tuning out the noisome pestilence of the world and the enemy and tune in The Voice of God to ensure that the things we do and say will be pleasing to Him, Amen? Amen! God bless you for stopping by!

Commit your works to The Lord and He will establish your thoughts (Proverbs 16:3).

*names have been changed and details omitted to protect privacy.

Just an average girl. Saved by and serving an AWESOME God who assigned me to help encourage His people to #StayOnTheWall. View all posts by BlenCouragesU

4 thoughts on “The Voice”

Talk to me... Cancel reply